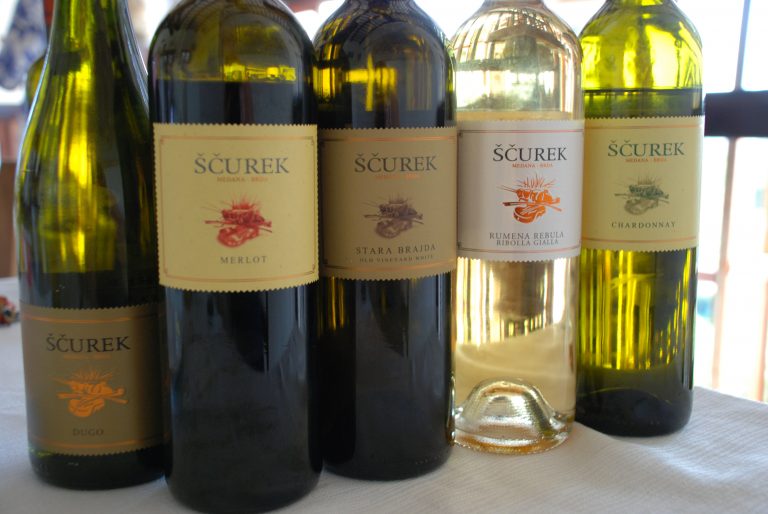 This whole ‘writing a blog’ business is great, so long as you can do it after taking paracetamol and whilst being sat with a glass of effervescent orange vitamin supplements. 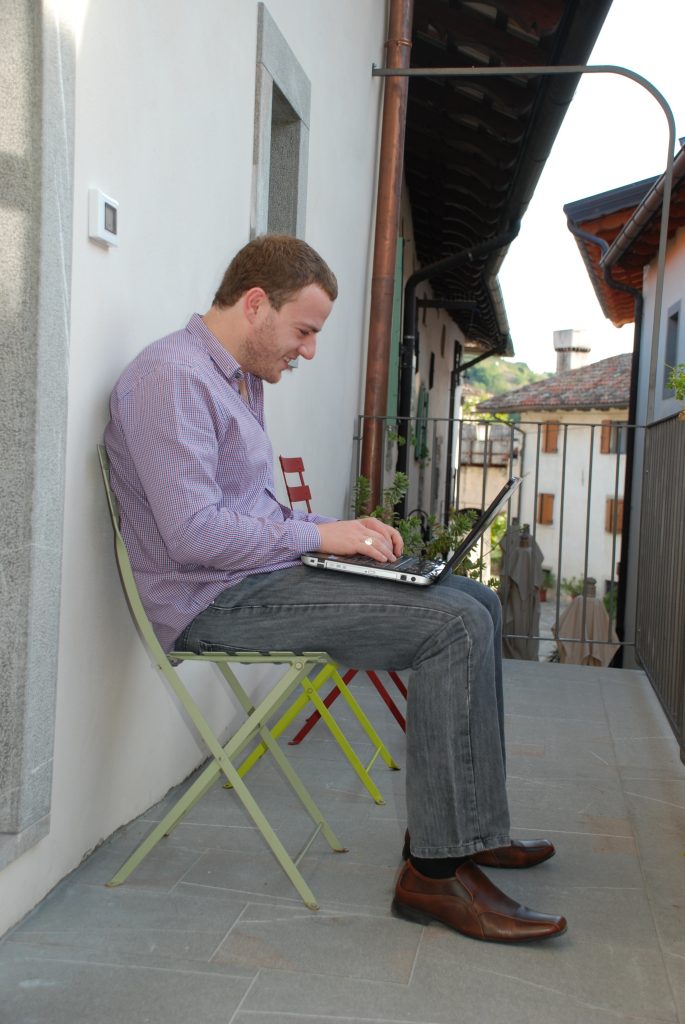 We had a good day yesterday. Mornings here don’t seem to be overly rushed. So, we thought we’d join the locals. After a very pleasant breakfast, we thought we’d take a look at some of the local sights. This (inevitably) ended in myself walking into a vineyard and getting excited whilst looking at the grapes. Merlot, I believe. 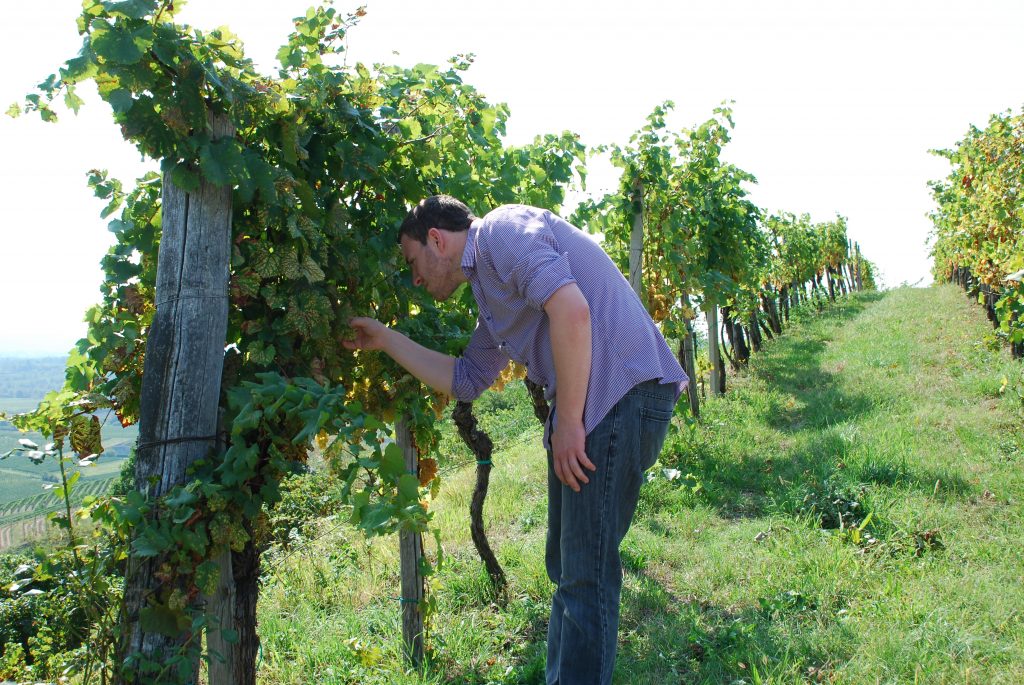 A drive of all of 500m from the vineyard was Ščurek. After a few minutes of walking around and admiring various plants on the estate that were fruiting (kiwi and olives), we were greeted by a man called Tomaž (I got this wrong and thought his name was Andrej – it took me a whole hour to find out that his name was Tomaž. Sleep deprivation is not good). This is the first time we had met him. 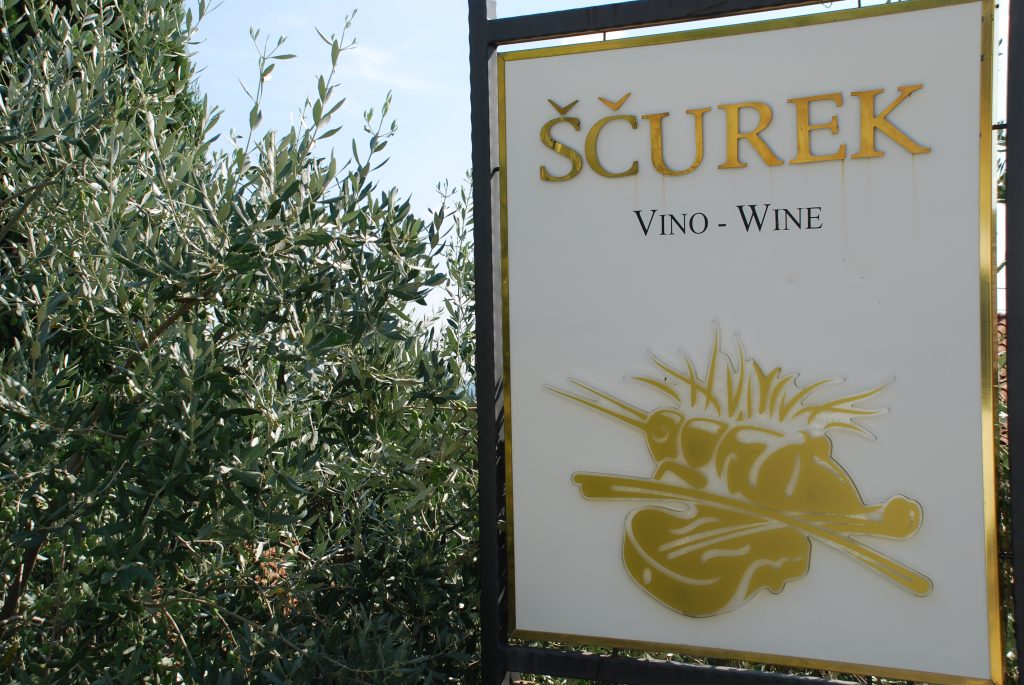 After explaining our business and a fleeting tour of the cellars and storage rooms, we were taken to a room with one of the most spectacular views in Europe. 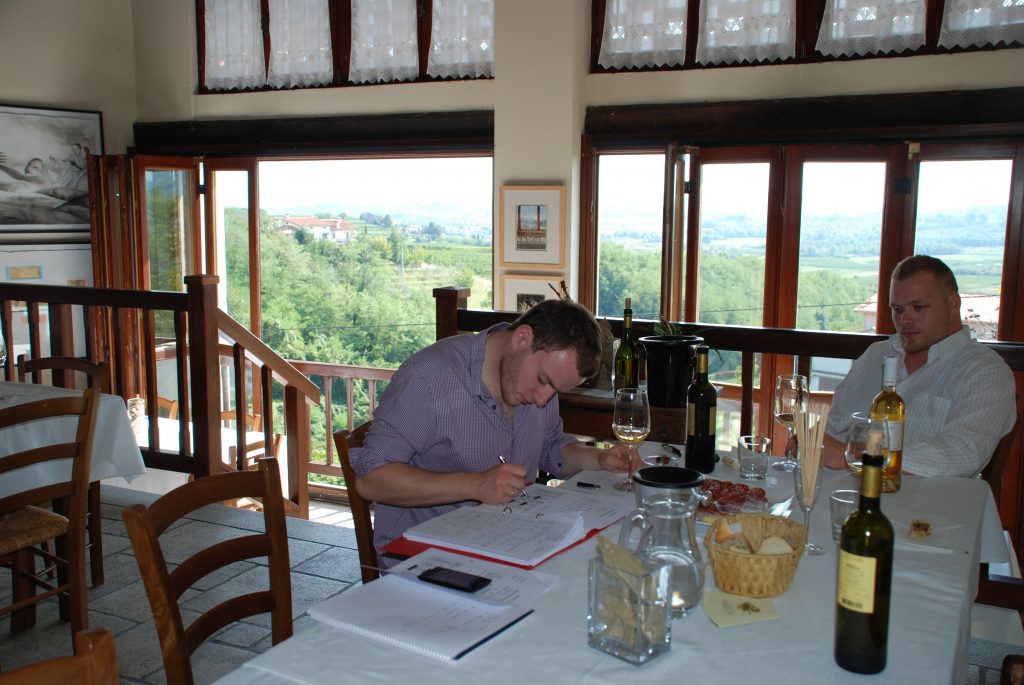 On the left was Italy, the right was Slovenia. We started the tasting. Wines included Tocai Friulano, Sauvignon Blanc and Chardonnay, but as Tomaž (he was Tomaž by this point) got to know us, more and more wines started flowing. 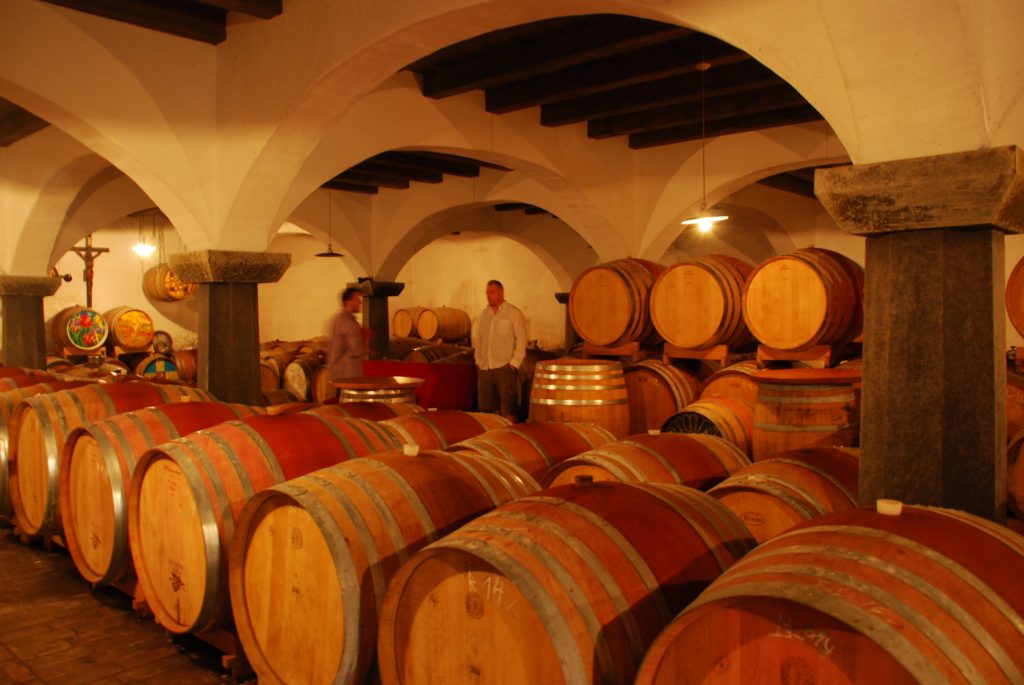 Before we knew it, he had brought out the best stuff. I was just about lost for words. We then ended up with a bonus tour of the cellar again, this time, with a syphon. 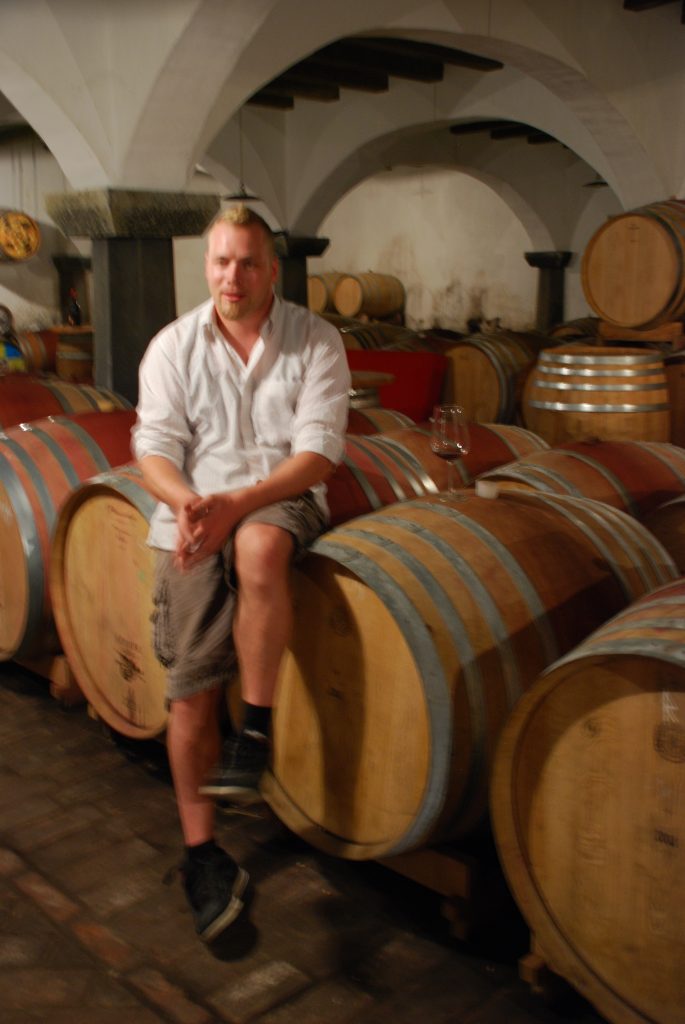 We spent the next hour tapping into barrels and tasting Merlot, Cabernet Franc and other wines, at various stages of maturity. The wine was stunning. The estate and the people equally so. We’re coming back…

After being lost for words at Ščurek, it seemed like a good idea to drink coffee and eat strudel. We’re having a civilised afternoon here. We waited at the restaurant of Sebastjan (the chap from Belica, who we visited yesterday). 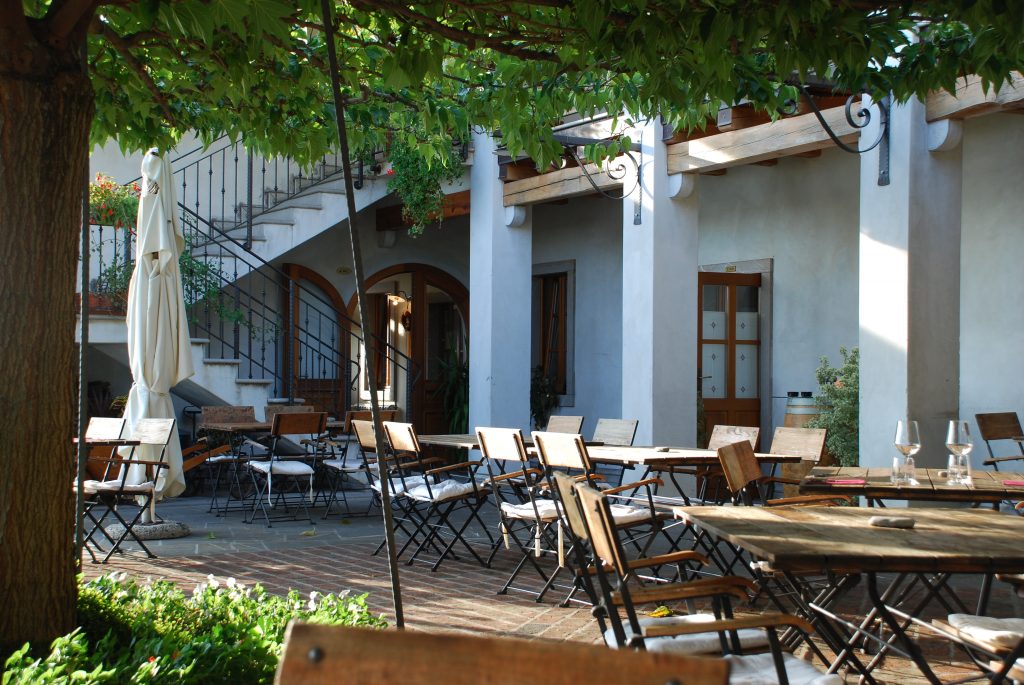 Again, the view was amazing. He was very keen to show us his most recent work with Muscat and Cabernet Sauvignon. We weren’t going anywhere till we had tried this and had a tour of his cellar. It turns out that winemakers here double up as cheese, salami and proscuitto producers. He was proud to show us the cheese and salami maturation rooms, as well as his prosciutto curing ‘palace’. 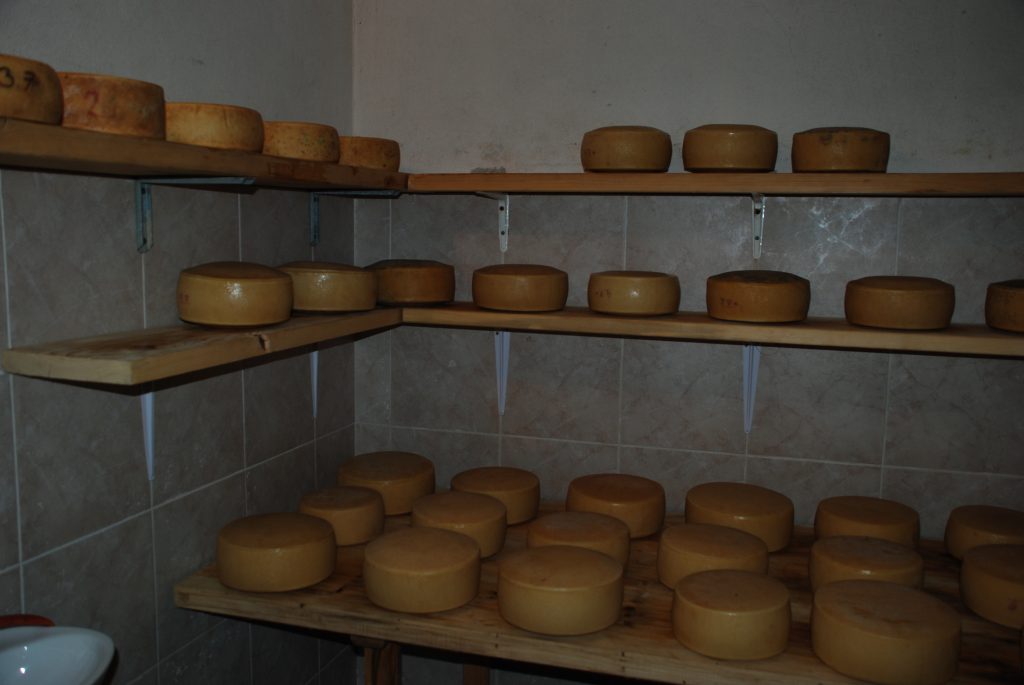 Amazing. I like this guy. His restaurants, accommodation and wine are all of equal quality. He puts time and effort into all of these.

Our last visit of the day was to Dolfo. The winemaker here is a bit of a maverick. So much so that he doesn’t even look like a winemaker. Long hair, sunglasses at night and a modern, philosophical approach to making his wines. 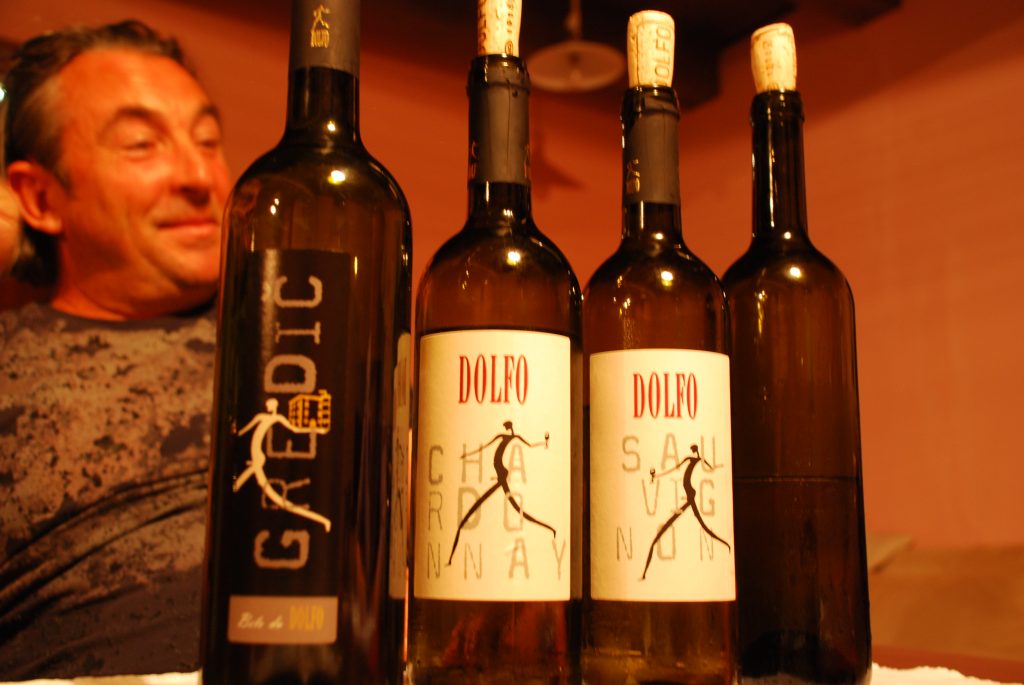 He doesn’t make the normal stuff – he isn’t interested in that. Instead, he has decided to make super dry wines. As dry as is reasonably possible. He explained his philosophy – basically, man has destroyed the concept of water by making wine. It’s a balanced universe, and we must return what we have taken. His way of doing this is by producing very, very pure wine. We tasted 6 different wines, including sparkling, white and red. I have a lot of respect for this man and what he is doing. His wines were also impressive… 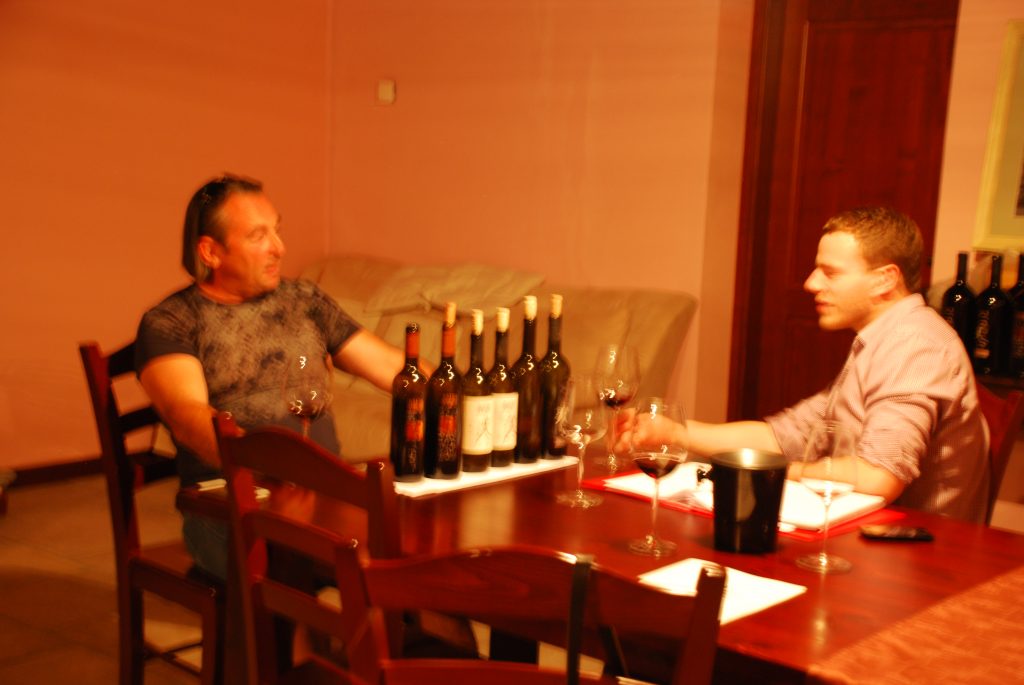 Come back tomorrow. This day just started and I have a feeling it’s gonna be an interesting one. 4 tastings on the way. Vipava valley, Kras and Primorska are the regions we are visiting today.

Hope you excuse us some shaken photos. But have in mind we tasted over 20 wines this day. 😉