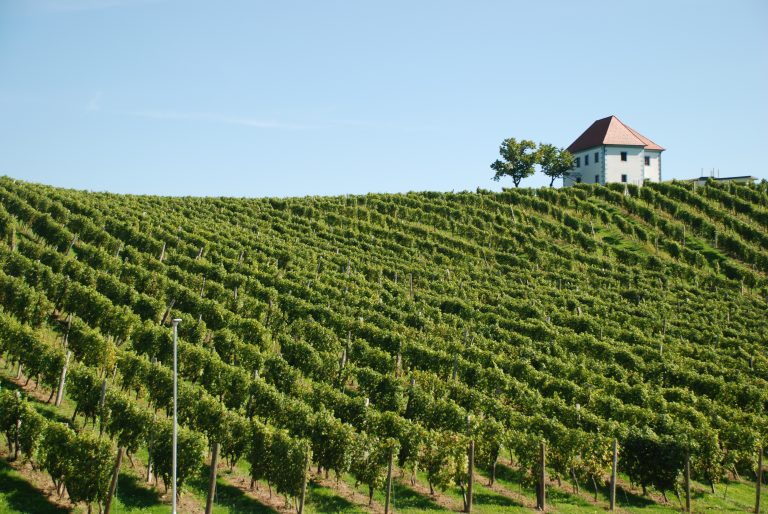 Sleep has never been so welcomed. Another decent day of tasting was ahead too. We made a point of highlighting the fact that we were sat on a terrace, eating breakfast in the warm sun in late September. Sometimes, life could not be better. 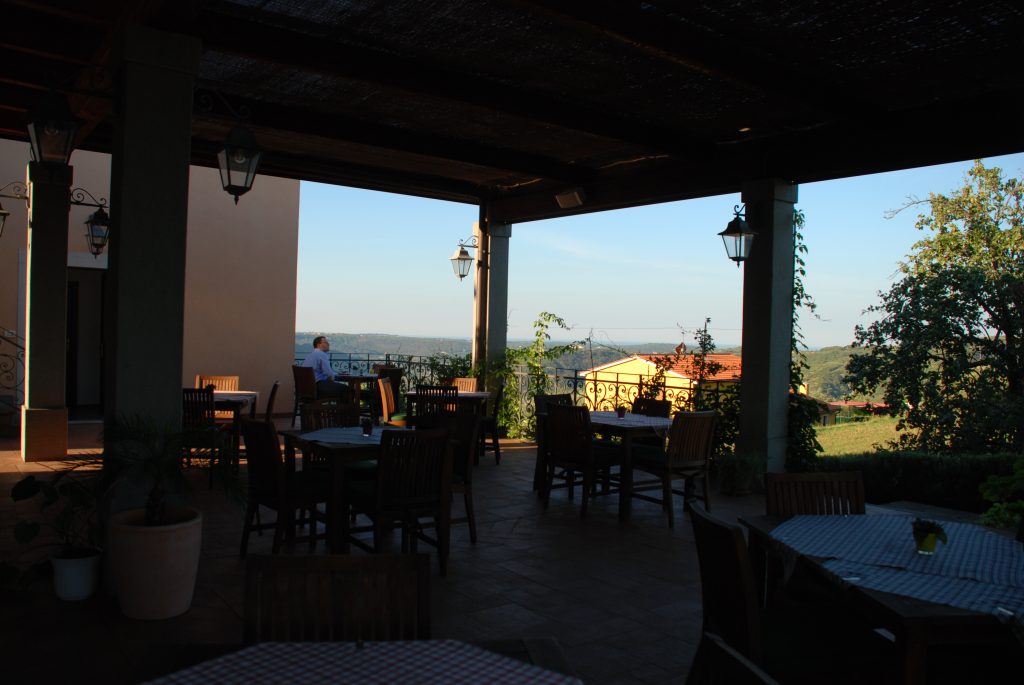 Breakfast was not half bad either. Not hanging around for too long, we made sure that we were soon on the road.

A short while later, we arrived at Zlati Grič (translation: Golden Hill).

Unlike all of the other wineries, this one was ultra-modern, with the winery being sunk into a hillside. In fact, it looked more like something out of a Bond film. 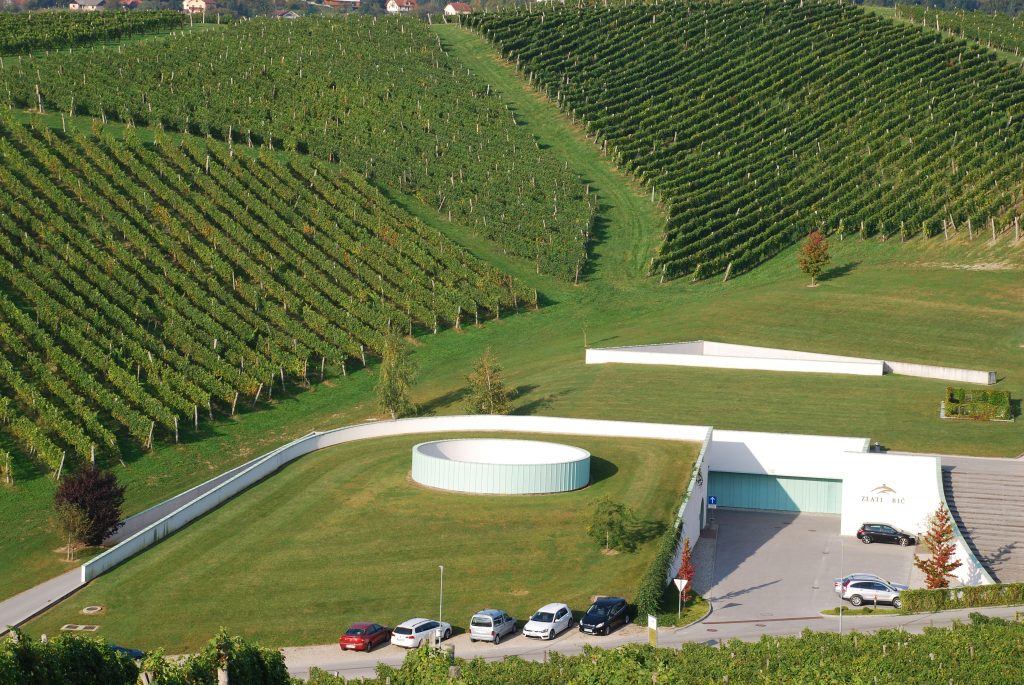 A tour of the winery was fascinating. This one was a bit different to the rest. The level of modernity was jaw-dropping. Everything is fresh and technological, but you can’t help but noticing that despite all of this, the attention to detail and the hand-work is still there. 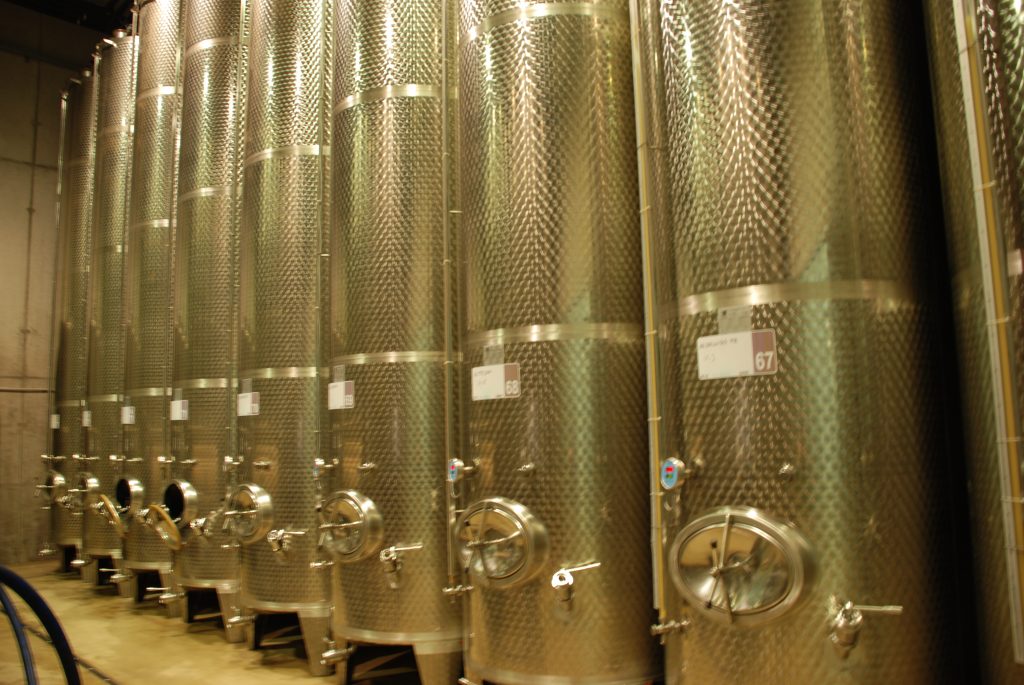 From the surface (literally), it didn’t really look like there was much there. Underground, it was a different story.

After a fleeting visit of the complex, we were bundled into a tasting room, where we were asked what we would like to taste. Silly question. So, we started from the top and worked our way down their list. It was impressive. 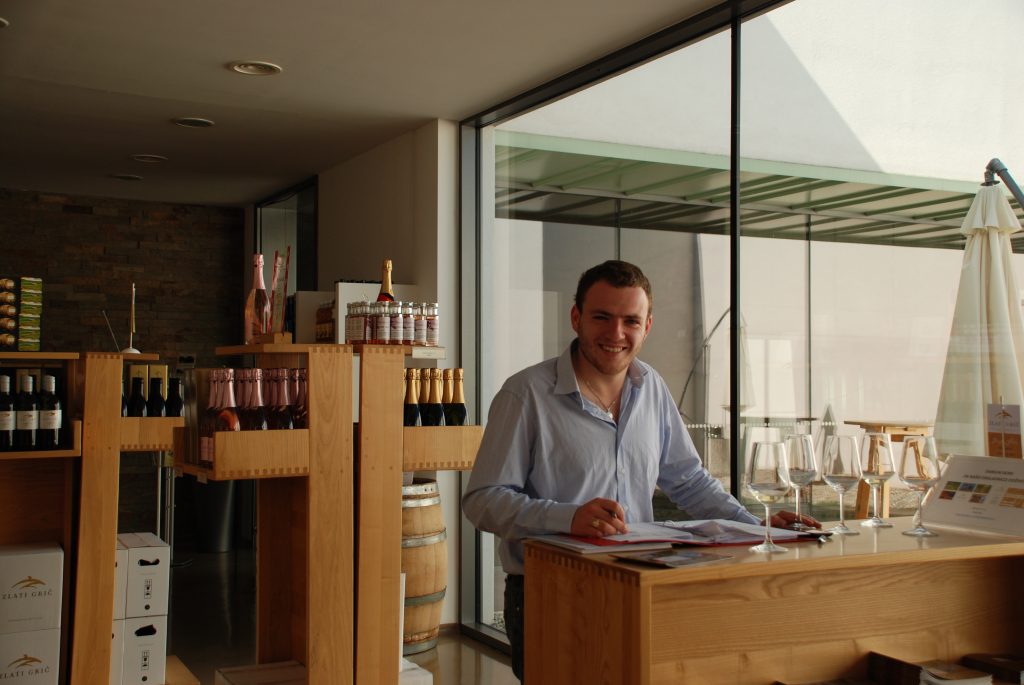 After visiting Zlati Grič, we were taking photos. The area, the town, the whole place is beautiful. And peaceful. Grič even decided to sling a 9-hole golf course into the middle of the vineyards. That’s just clever…

By this point, we’re starting to get fed up of driving. It’s an amazing country to drive through, but there’s no getting around the fact that pulling a couple of hundred kilometers every day will eventually take its toll. It’s good to know there’s wine at the end of it…

We eventually rocked up at Magdič. It’s nestled right in the middle of a very rural Slovenian village called Lendava, up a small track, on a hill side. This is often where you find the best stuff. This is the complete polar opposite to Grič – it’s more like a quaint little farm. Mr. and Mrs. Magdič welcomed us, bundled us into chairs and started a tasting, complete with cheese, meats, breads, cake. You name it, it was there. A bit of an impromptu 3 course light lunch. 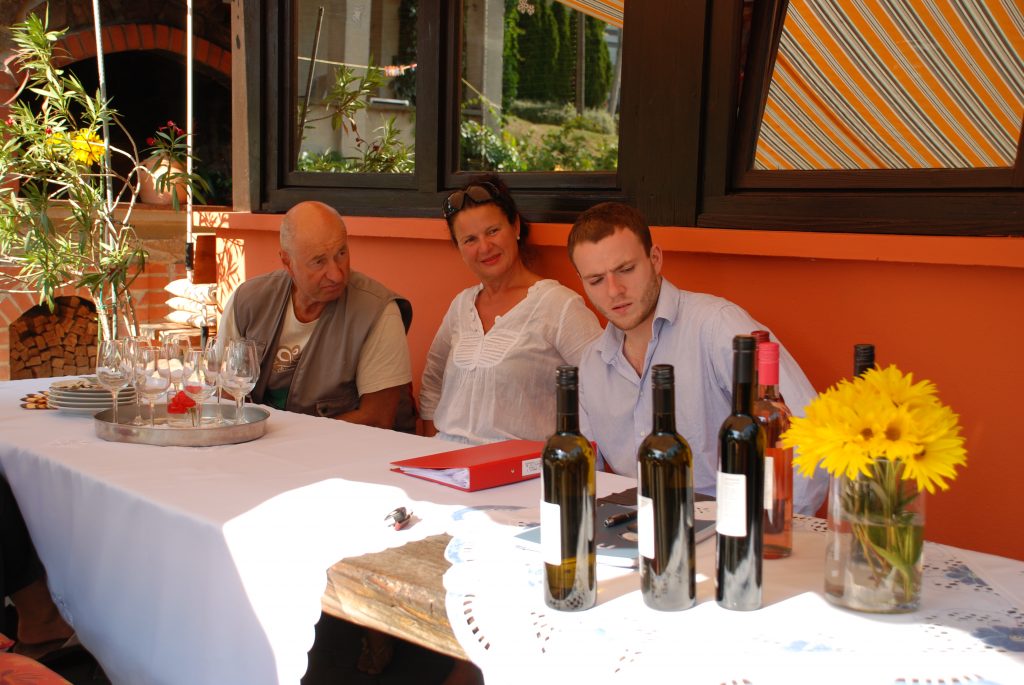 The wine was impressive, and it is actually lovely to see that people are still making wine in the style that they have done for years. It’s fresh in its own right. 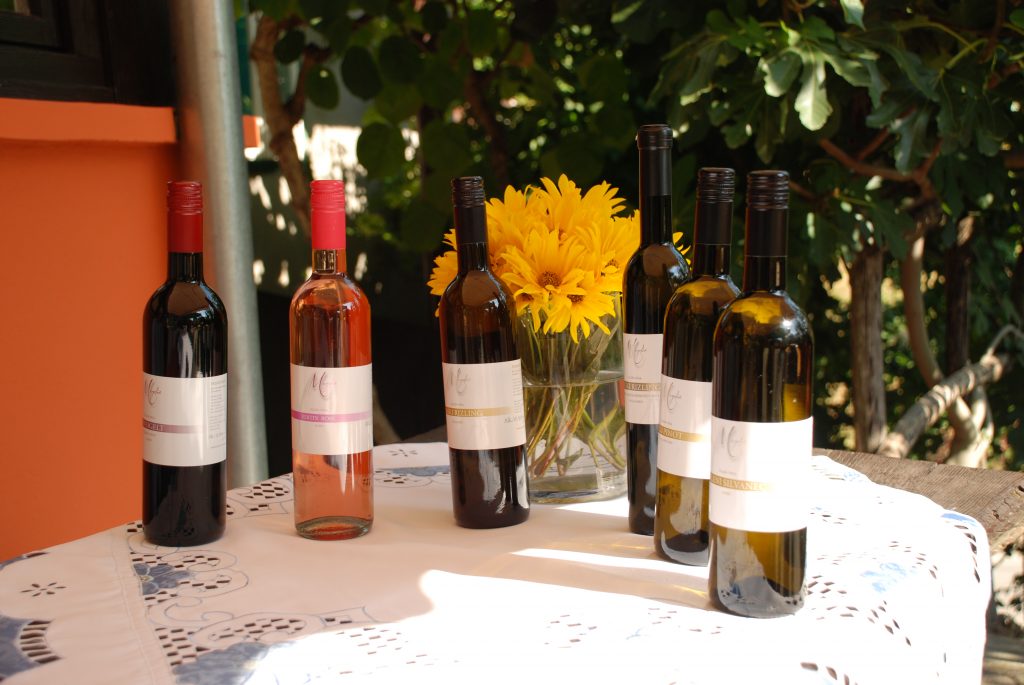 Quick look around the estate, visit to the cellar and vineyards and off we go. Back to Zlati Grič where we’ve booked a room in the middle of the vineyards.

Obligatory stop in Slovenia’s second largest city Maribor where the oldest living specimen on the world of a noble grape vine that still bears grapes grows. And it was full, just 5 days before harvest. 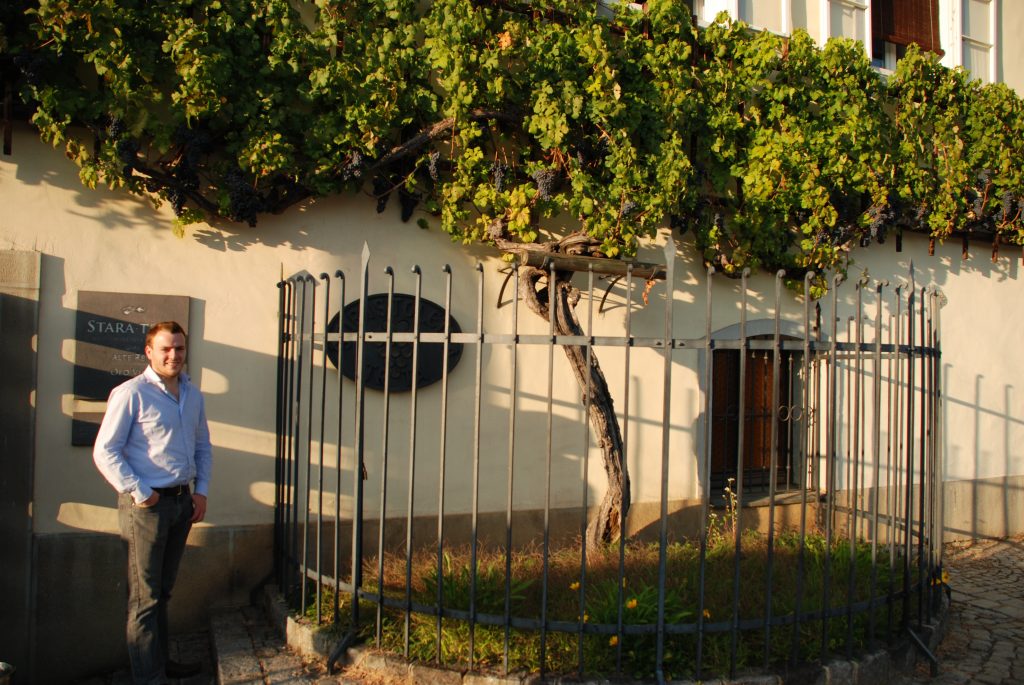 On a good year they make approximately 30 liters of wine out of it and it’s mostly used for protocolary gifts. They’ve told us Brad Pitt has a bottle and we wondered whether he’s going to split it with Angelina. 😉

Today we did more than 400 kilometers and spent most of the day sitting in the car. So in the evening we decided it’s time for a walk. Through the vineyards, pass the winery and into the old part of Slovenske Konjice. Lovely old town with few open bars. After 5 days of wine tasting we needed a beer. And we got it, a local lager from Laško brewery which lies just couple of miles away in the city with the same name. It was good. With everything closed the only place to get some food was city’s most famous fast food and kebab was for dinner. 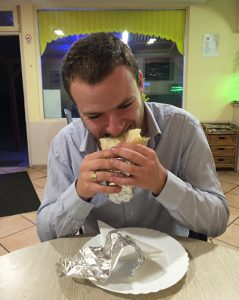 Happy and tired we returned to our castle on the hill.

Day 4 has been a tough one. A lot of driving, a lot of wine, but some brilliant characters. We’re onto something here…

Join us tomorrow for Day 5 – the finalé.